The St. Cloud Historic Mural Trail is a series of paintings used to express significant parts of our town’s rich history. It is also part of the statewide trail connecting the mural cities in Florida.

The Joyland Beach Pier and Dance Hall located near the beach on the lakeshore at Ohio Avenue provided a place for relaxation and entertainment for the growing town. It had replaced the original boat and bathhouse that was built in 1911 after it had been destroyed by fire and then again in April 1923. A new Bathing Pavilion was quickly built and opened two months later. In July 1935, flames consumed the Bathing Pavilion and all of its contents once again. Artist: Al Pepin Located at 10th & Pennsylvania 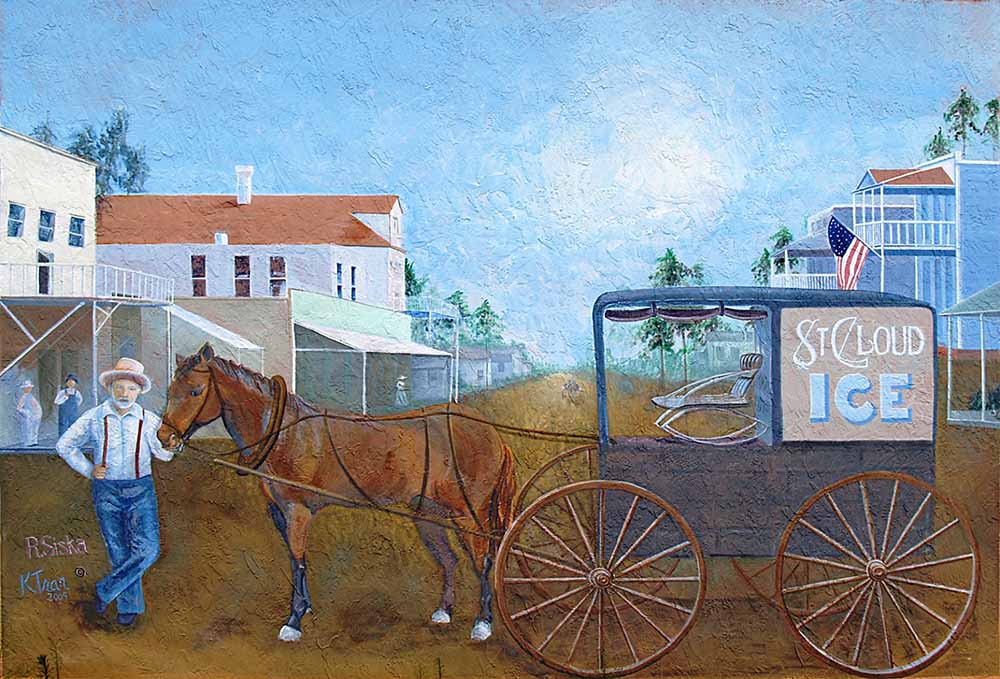 Horse drawn wagons delivered ice to homes and businesses from the Saint Cloud electric and ice plant at Tenth Street and Minnesota Avenue. When the plant reached its full production capacity in 1911, it could produce 10 tons of ice per day. Artists: Tran & Siska Located on the Magic Shop Bldg. on 10th St. 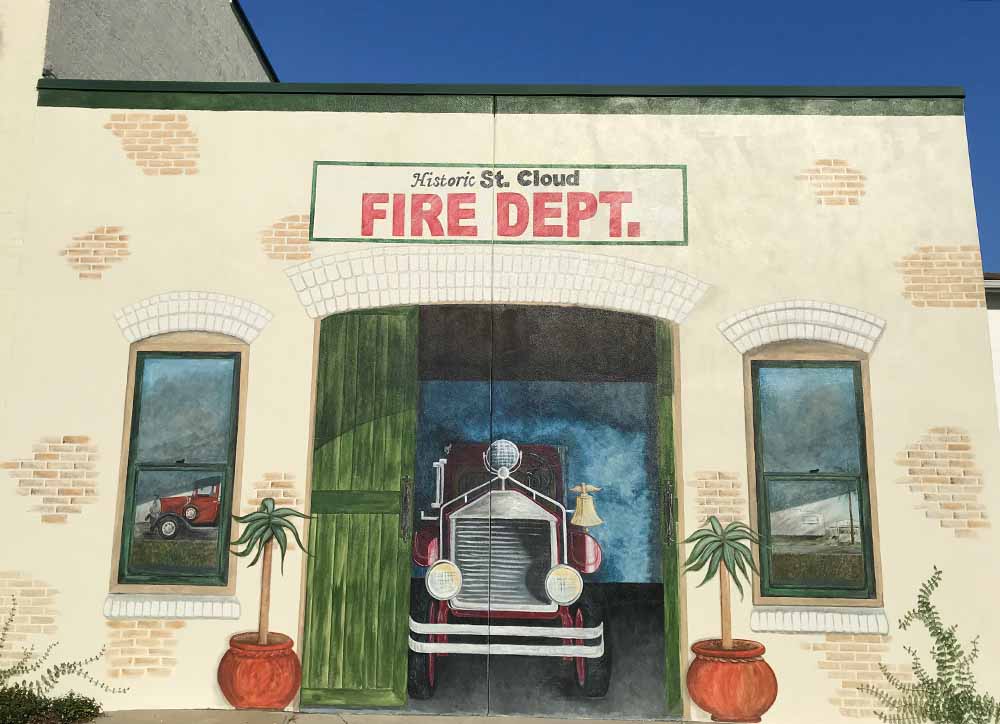 Originally built by Osceola County State Bank in 1911 by N.F. Bass this building later served as the St. Cloud City Hall. The town contracted to purchase the building and made the final payment in 1920. The addition on the south side was built by the city to house the fire department as depicted in this mural.
Artist: Juliana Davidson Located at: 10th & Florida Ave. 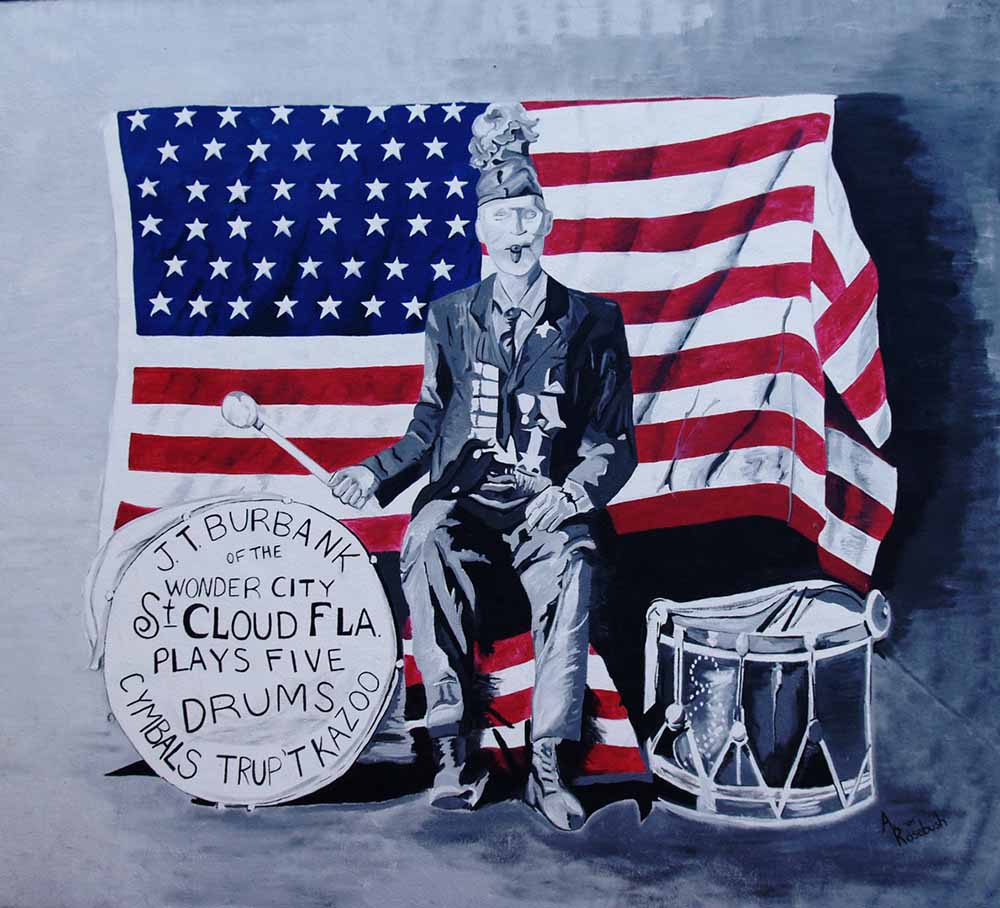 The Grand Army of the Republic Post 34 played an active role in bringing thousands of Union veterans to Saint Cloud in the early 1900s, the largest concentration of Union veterans in the South. The G.A.R. Fife and Drum Corp made these honored veterans welcomed with their many performances at parades and community events. J. Burbank was one of the founding members of the G.A.R. Fife and Drum Corps. Artist: Amy Rosebush 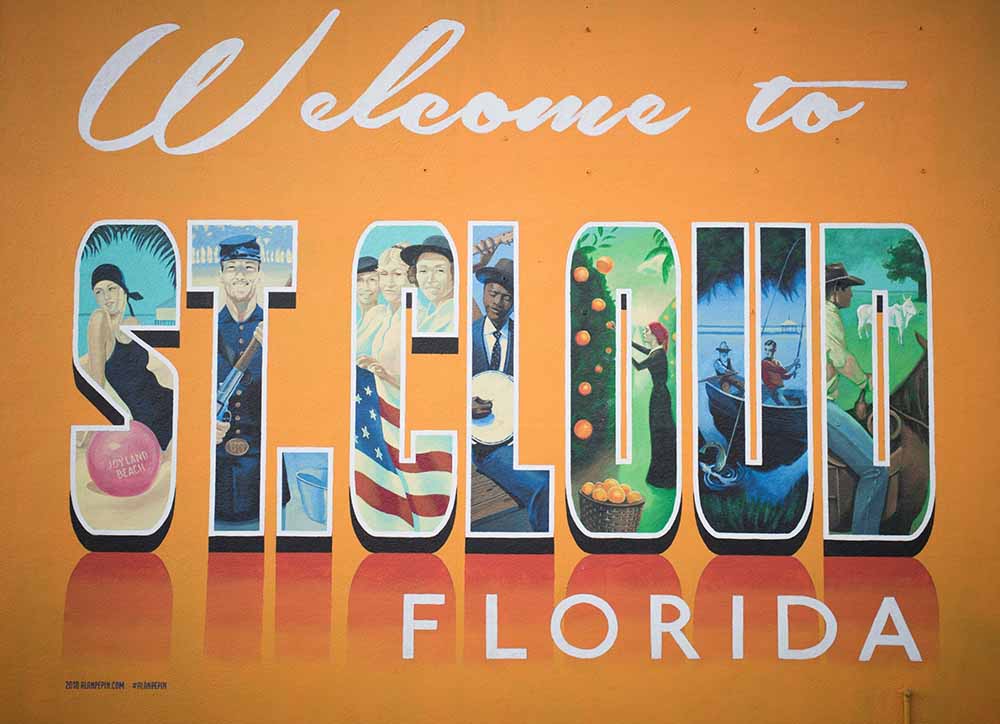 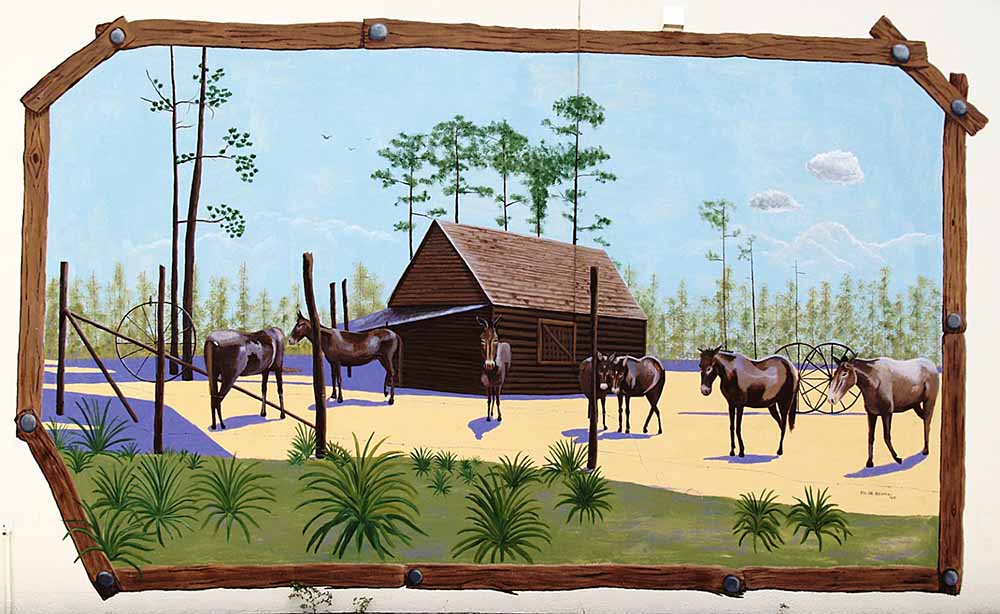 This mule yard on the south side of 13th Street between Pennsylvania and New York Avenues became history on March 29, 1928 when the city decided to transform it into a new city park. In 1936, a band shell was constructed. On June 13, 1937, the park was dedicated as the Veterans Memorial Park. In 1947, the United Spanish War Veterans donated a ‘Brace of Cannon” that was used in World War II. Since then, other people have procured equipment to commemorate our veterans from other wars. Artist: Pia De Biedma 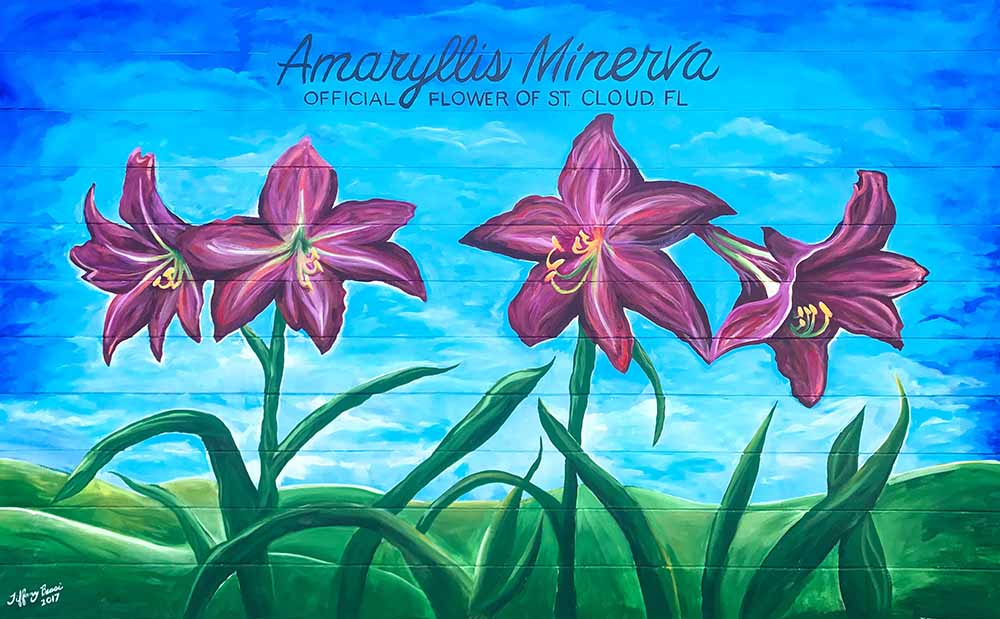 On April 23rd, 2015 St. Cloud officially recognized the Red Amaryllis Minerva as the city flower. We chose the Red Amaryllis Minerva for a few reasons… We were looking for a flower that did well in our climate, but also was easy to maintain and reproduce. Not only did this flower meet those physical requirements, but it also met our symbolical goals as well. Amaryllis means sparkling in Greek, referring to its large star shape, Hippeastrum or horse star the scientific name for the blossom which can further represent the stars in the American Flag. The Red Amaryllis became a perfect match. Artist: Tiffany Beasi 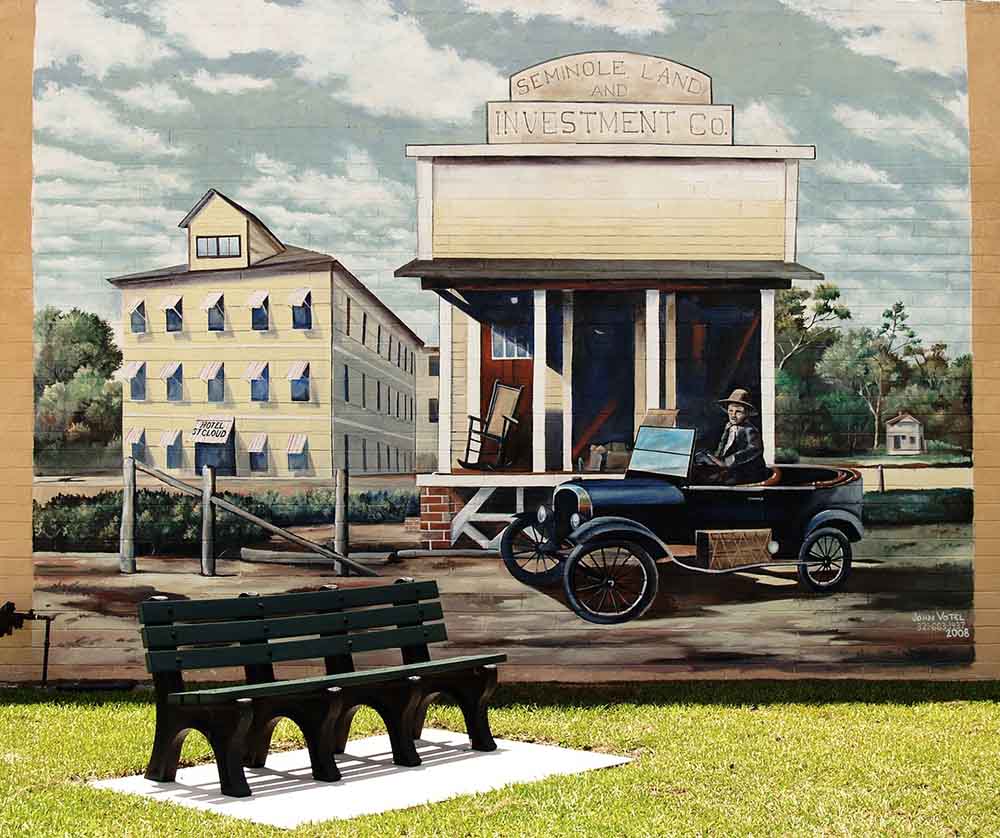 Looking to find a location to establish a veteran’s retirement colony, the Grand Army of the Republic established the Seminole Land & Investment Company. The site had to meet its requirements of health, climate and productiveness of the soil. In 1909, 35,000 acres of the defunct Disston sugar plantation were bought and became Saint Cloud. Through its newspaper, the G.A.R. promoted Saint Cloud. When the veterans arrived, they could pick up their deeds at the Seminole Land & Investment Company office. Artist: John Votel

‘War Heroes From the Past and Present’

The train station would be the embarkation point for local troops that served in two world wars. At it’s tracks, family and friends would welcome home many veterans. The station is now home to the Veterans of Foreign Wars Post 3227, which serves all of those who have guarded and defended our country. Artist: John Votel

The Saint Cloud Sugar Belt Railway opened in November 1890 and ran from Kissimmee through the Saint Cloud plantation to Narcoossee. Made to haul sugar to market, it also carried passengers and other freight through the area. In 1917, a brick station replaced the original wooden depot known as Sunny Side. Artists: Maria Arenas & Susi Soto Located at Beachamps Building at 10th St.

When the Union veterans first arrived in 1909, there were very few buildings. Everyone lived in tents. The first house was the home of G.W. Penn and still stands at 1205 Massachusetts Avenue. First National Bank was Saint Cloud’s first bank and opened in 1910. In 1890, S.L. Luper, Sr., the superintendent of the sugar plantation, established the private Sunnyside School at what is now Maryland Avenue and Tenth Street. The first church was the First Presbyterian Church of Saint Cloud. The original structure was renovated in 1926. In 1965, it was raised and replaced by a new brick structure. Artist: Juliana Davidson

In 1881, Hamilton Disston purchased four million acres of land from Florida’s indebted Internal Improvement Fund. The purchase may have been the largest land purchase by an individual in world history. He planned to drain the swampland north of Lake Okeechobee to open the area to agriculture. His canal system included dredging the canal between Lake Tohopekaliga and East Lake Tohopekaliga. His efforts would be a major factor in the development of several towns, including Saint Cloud. Artists: Sunshine & Rainmaker 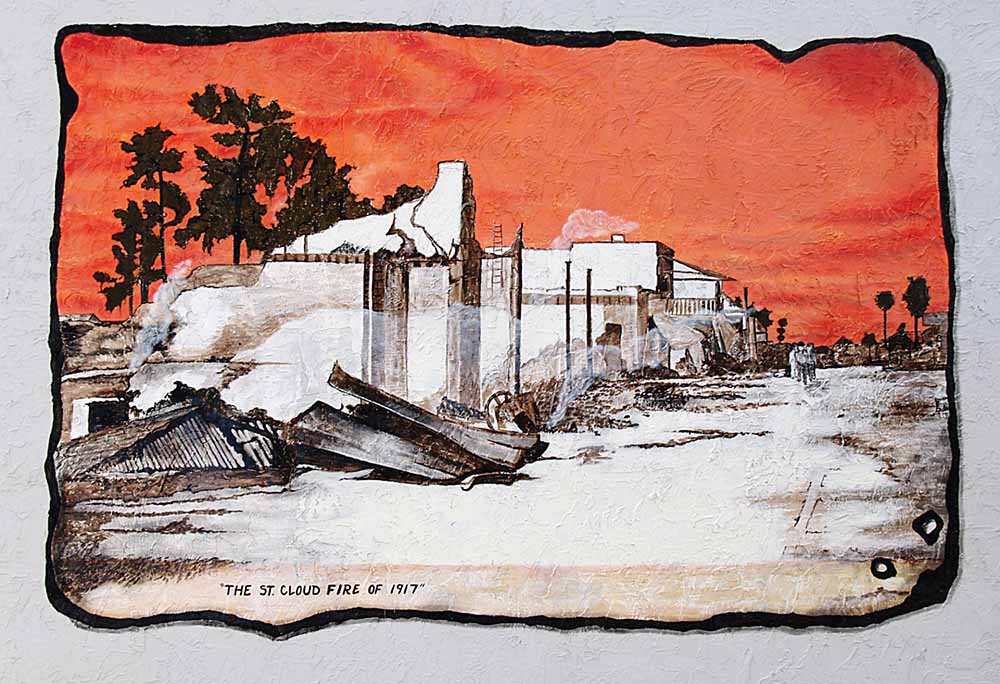 Just after midnight on July 28, 1917, a suspicious fire started in a storeroom and spread to businesses and apartments on both sides of Pennsylvania Avenue between Tenth and Eleventh Streets. Volunteers formed bucket brigades to put out the fire. People removed much of the contents of two grocery stores, other businesses, the post office and residences before the flames forced them to stop. Although arson was suspected, the case was never solved. Artist: Juliana Davidson 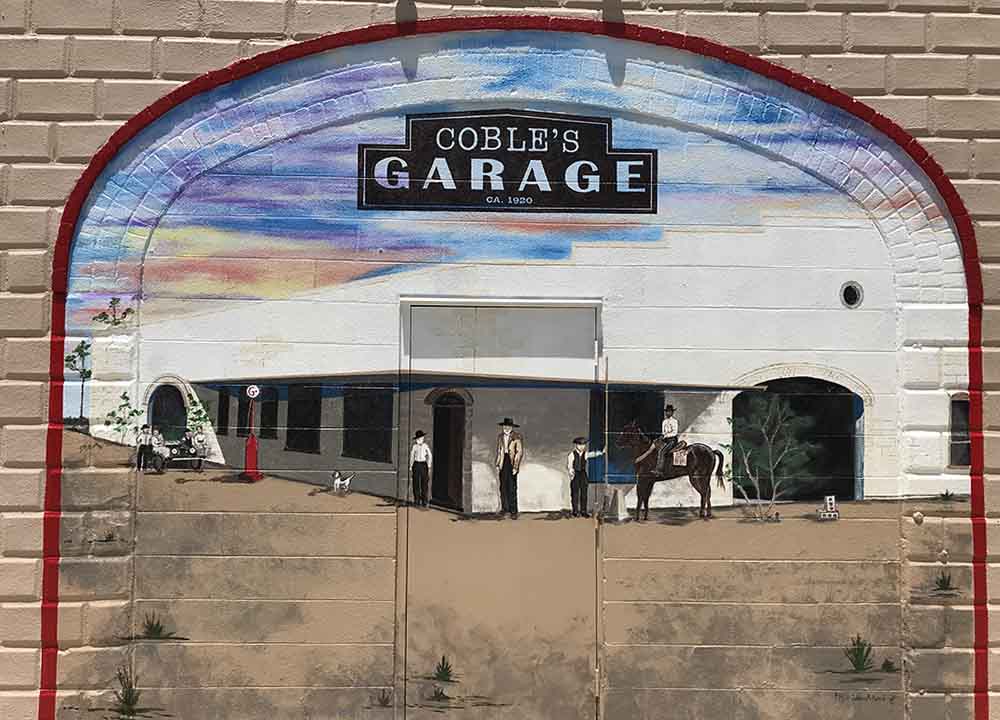 Built in 1914, Coble’s Garage set on the corner of Massachusettes Avenue and 10th. This building currently serves as our local hardware store. Artist: Juliana Davidson Ross 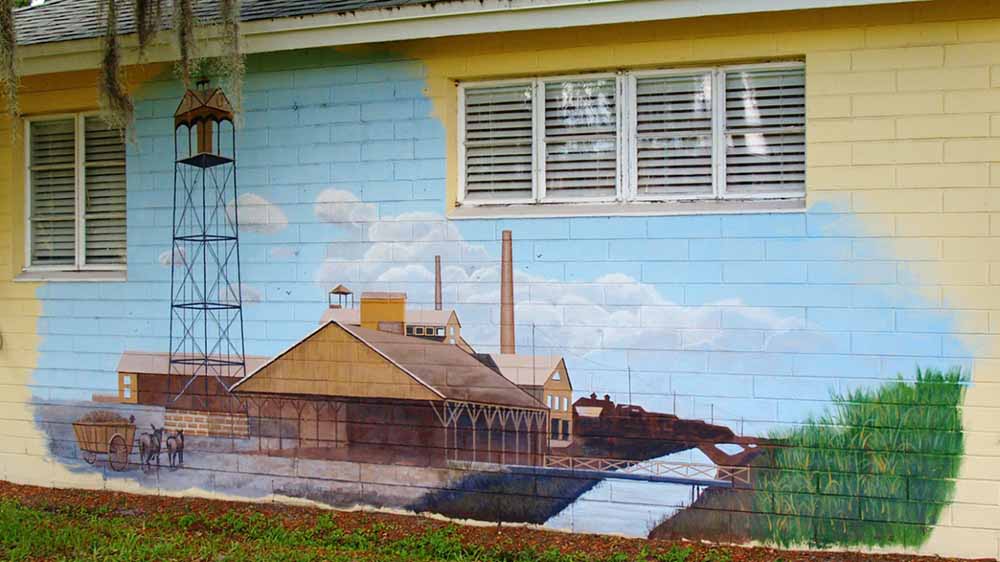 In 1881, Hamilton Disston purchased four million acres of land in Florida. His efforts to drain the Everglades to open Florida to agriculture included dredging the canal between St. Cloud and Kissimmee. When it was completed on November 22, 1884, the canal lowered the level of East Lake Tohopekaliga to expose the rich soil. Disston established a 420-acre sugar plantation and created the Florida Sugar Manufacturing Company. Costing $350,000 to build, it was one of the most advanced sugar mills of its time. The plantation would eventually be bought and become the town of Saint Cloud. Artist: Pia De Biedma. 10th & Massachusetts Ave.